In our last posting we carried an article about Brent Bozell which referred in passing to the Carlist Requetes in the Spanish Civil War. We recently came across a photograph of a young requeta who had lost his upper limbs and possibly an ear too. Our correspondent, Charles Kerr, of Kerr’s Musings’ fame, remarked that this photograph reminded him of Solzhenitsyn’s remark about the Kengir marriages: Too pure for the modern age. 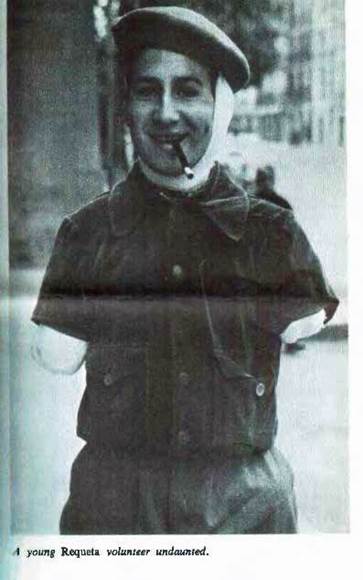 In our previous posting we made reference to The Catholic Herald editor’s endorsement of the Alpha scheme, and the Holy Father’s warm words of approval for Catholic Charismatic Renewal.  The following issue of The Catholic Herald, on July 11th 2014, carried an article by a member of the Ordinariate criticising Alpha for much the same reasons as we had advanced. We have reproduced that article here for the benefit of our readers.

Another apology in the offing?

Alas, the Holy Father, appears to have extended his approval not only to Catholic Charismatic Renewal but also to Protestant Charismatic renewal. In an article in The Catholic Herald (18th July 2010) we are advised that:

‘Pope Francis will pay a brief “private visit” to the Italian church of a Pentecostal pastor he knew from Argentina, a          Vatican spokesman has said.  Fr Frederico Lombardi said that the visit to the Evangelical Church of Reconciliation…”is under study and likely would take place [on] July 26”.

Fr Lombardi said the Pope knew the church’s pastor, Giovanni Traettino, from Buenos Aires, where the Pentecostal pastor participated in ecumenical events with Catholics. The then Cardinal Jorge Bergoglio, along with Traettino and Capuchin Fr. Raniero Cantalamassa, preacher of the papal household, spoke at a large ecumenical gathering in Buenos Aires in 2006. (…)

Brian Stiller of the World Evangelical Alliance, who was present at a meeting with Pope and evangelical pastors and tele-evangelists in June ‘wrote about the encounter on his blog. “We talked about Christians marginalised, pressed under the weight of government power or the majority presence of other faiths,” Mr Stiller wrote. “He listened and then told a remarkable story. In his years in and out of Rome, he became friends with the pastor of a Pentecostal Church in Rome. In time he came to learn that the church and pastor felt the power and presence of the Catholic Church, with its weighty presence, obstructing their desire to grow and be a witness. “ So,” he said, “this July I will preach in his church on Sunday and offer an apology from my Church for the hurt it has brought to their congregation”.

The Catholic Herald reports that Fr Lombardi confirmed that the pastor referred to was Mr Traettino, but did not comment on the rest of Mr Stiller’s account.  Perhaps we are to be led to believe that Mr Stiller comes from the Scalfari school of journalism.  That would perhaps be the most charitable slant we could put on this  piece of news.

It is not our place to judge the Holy Father but when we heard the news break yet again of one of ‘those’ “interviews” we are sure we were not alone in wishing that he observed an occasional  observance of the vow of silence.  These “interviews” and “telephone calls”, the authenticity of which is often denied or disputed, do little to encourage us to take some of the Holy Father’s  statements seriously.  Perhaps in some ways this is a good thing in that it causes even the most ardent papolatrist to think as much  about the substance as the source of papal statements (or rather statements said to be of papal origin). It is said that the Vatican is to revamp its media operations – perhaps the old adage ‘silence is golden’ ought to be considered as its watchword. One can think of few other organisations of the size of the Vatican where the Press Officer is engaged so often in remedial action. If the Pope must speak with Signor Scalfari surely the Vatican can run to the cost of a recording device, if La Repubblica cannot.  If, on the other hand, no recording takes place so as to afford deniability, then, as they say in Houston, ‘we have a problem’.

‘It is interesting to note that the contestation of the precept of celibacy has always coincided with signs of decadence in the Church, while in times of renewed faith and cultural blossoming one has noted a strengthened observance of celibacy.’ (Cardinal Brandmüller)

The interview that Pope Francis gave to Scalfari allegedly touched inter alia on the subject of priestly celibacy. We have posted for our readers this article by Sandro Magister which alludes to that interview and to the response to same made by Cardinal Walter Brandmüller.

Sandro Magister also reflects on Pope Francis’ taking as a model as Pope, St Celestine, the first Pope to resign. But as Magister points out St Celestine’s sanctity did not arise from his service as pontiff – a service which was pretty disastrous.

In this little essay Robert Hickson reflects on an amusing little play enacted betwixt a traditional priest and a certain Archbishop Annibale Psittacus – what might be described as a Catholic “parrot” sketch which appeared in the Rorate  Coeli blog.  (

As we write, no definitive evidence has been produced regarding the cause of the terrible tragedy which befell the passengers [may their souls rest in peace] of  Malaysian airliner over Ukraine. There is plenty of speculation and already blame is being directed towards Russia and President Putin in particular.   In the attached article taken from Peter Hitchens’ blog he asks us not to consider this catastrophe in a vacuum but to have regard for the greater picture. We  present this article because it provides an alternative view to that generally aired on the media at large.

In the Middle East an even greater number of people have been killed in the conflict in Gaza – there too regard has to be had for the greater picture and one cannot but think that this conflict will never be resolved until the USA acts as a neutral broker rather than as the bank of last resort for the State of Israel.  The Neo-Con agenda of divide and conquer in the Middle East was summed up thus by Stephen J Sniegoski   in his work The Transparent Cabal – The Neoconservative Agenda, War in the Middle East and the National Interest of Israel:

‘The aim of the neo-conservative/Likudnik foreign policy strategy was to weaken and fragment Israel’s Middle East adversaries and concomitantly increase Israel’s relative strength, both externally and internally. A key objective was to eliminate the demographic threat posed by Palestinians to the Jewish state, which the destabilization of Israel’s external enemies would achieve, since Palestinian resistance depended upon external support, both moral and material. Without outside support, the Palestinians would be forced to accede to whatever type of peaceful solution Israel offered.’ (p.5)

The neo-conservative Michael Ledeen  in his book, The War Against the Terror Masters, openly sought to use the USA to defeat Israel’s enemies stated:

‘Stability is an unworthy American mission, and a misleading concept, to boot.  We do not want stability in Iran, Iraq, Syria, Lebanon, and even Saudi Arabia; we want things to change   The real issue is not whether, but how best to destabilize.’

The evidence of how to destabilise has been enacted before our very eyes. Does anyone believe that it was  purely accidental that Iraq, Syria, Lebanon, Libya, Egypt have all been destabilised and have been effectively taken out of the power equation in the Middle East?

The influence of the Israeli lobby in the USA was highlighted in the article by the academics Mearsheimer and Walt, ‘The Israeli Lobby and U.S. Foreign Policy’. It may be found here and helps provide some background to the present paralysis in Palestinian/Israeli  ‘peace’ efforts.

Belloc on Almsgiving – Prayer and Mercy

In this short essay Belloc’s encounter with a mendicant in the Balearics brings back a memory to Professor Hickson of a similar meeting in Sicily.

On the 18th July the British House of Lords debated Lord Falconer’s euphemistically named Assisted Dying Bill which provides for assisted suicide – self-killing of the terminally ill. It  took place against the background of a warning by the UK Supreme Court that it may interpret existing law concerning suicide in a less restrictive manner than has hitherto been the position. It suggested that Parliament address the question of the existing law’s compatibility with the Human Rights Act.   Paradoxically, this proposed legislation does not address the type of case which has been recently before the court and the basis for the warning.

It was no paradox that such a measure should have received its second reading on the Feast of St Camillus of Lellis – perhaps a pointer to the Saint whose intercession we require to stop such legislation in the various legislative assemblies in the UK. St Camillus, according to the introduction to his Feast Day in the St Andrew’s Missal, ‘obtained from the Apostolic See approbation for his order’ which consecrated itself to the care of the sick. ‘Inspired by the example of Jesus who died for us and who has declared that there is no greater proof of love than to give one’s life for others, these religious promised to tend the sick, even those stricken with the plague. St Camillus as well as his Institute received from God a special grace to help souls to emerge victoriously from the death struggle, wherefore the name of this saint has been included in the litany for the Agonising…Leo XIII proclaimed him the patron of hospitals and patients, and Pius XI of all those who nurse them.

The Order founded by St Camillus was known as Brothers of the Happy Death and as Archbishop Goodier reminds us:

‘ …we in modern times have reason to preserve the memory of Camillus, for we owe him two great debts. In the first place he may be said to be the founder of the modern nursing spirit; in the second place, without any doubt, we are indebted to him for the institution of the Red Cross. When the Order which he founded was formally approved by the Pope, that its members might be distinguished from other regulars, Camillus asked that they might be permitted to wear a red cross on their cassock and mantle. By an apostolic brief, dated 26th June, 1586, the permission was granted; and three days later, on the Feast of Ss. Peter and Paul, Camillus with a few of his followers came to St. Peter’s, each wearing the red cross, and there dedicated themselves and their work to God for all time.’

Following the appalling treatment of the elderly ill in some British hospitals and nursing homes, it has been suggested by some that this is due in part to the low wages paid in some of these establishments. St Camillus must have heard these suggestions in his day too, for, As Archbishop Goodier writes:

‘He began to love the patients in the hospital, not merely to serve them; and the more he loved them the more he was troubled by the treatment they received, even in so comparatively well-regulated a hospital as S. Giacomo. One evening, as he stood in the middle of a ward, the thought occurred to him that good nursing depended on love that the more it was independent of mere wages the better it would be; that if he could gather men about him who would nurse for love, and would leave the wages to look after themselves, then he might hope to raise nursing to the standard he desired.’

During the  Lord’s debate there were several references to love as a justification for assisting suicide. But little, if any, direct reference was made to the  evil of suicide and the consequences of such in terms of man’s true end, which is beyond death, and which true love would not dare put in jeopardy.