The South African Catholic Bishops’ Conference last week issued a statement of support for Nelson Mandela, the former South African president, following reports that he had been hospitalised. The statement said:

“Former President Mandela means different things to different people. To his family he is a veritable Patriarch who stands for and is an example of the virtues of a truly great and loving Father, who cares for all near and dear to him.

To the Nation, he is a great and inspiring leader, a true icon of the…reconciliation which we still need urgently.

To the international community, he is a unique African and global statesman who rose above personal, tribal, race and party interests in order to lead the South African nation through a difficult transition from apartheid to Democracy.”

I am disturbed by this glowing tribute to Mr Mandela, in the light of his record on pro-life/pro-family issues (see below). It is absolutely vital that Catholic leaders do not allow themselves to become respecters of persons, swept away by personality cults. Catholic leaders have a duty to stand up to public figures with  anti-life and anti-family records, however praiseworthy their record may be on other issues. The sanctity of human life and the dignity of the family are the foundation and guarantee of all other human rights.

Mr Mandela has been quoted as saying on abortion: “Women have the right to decide what they want to do with their bodies.” In 1996, Mandela signed into law the Choice on Termination of Pregnancy Bill, which permits abortion on demand. SPUC’s pro-life colleagues in South Africa tells us that the bill was introduced into the South African parliament by Nkosazana Dlamini-Zuma, Mr Mandela’s health minister. In addition, the wording of the new South African constitution, signed by Mr Mandela in 1996, had made the legalisation of abortion on demand a mere formality. Mr Mandela’s African National Congress (ANC) has a strong ideological committment to abortion, with the ANC Women’s League strongly behind the legalisation of abortion on demand. The ANC has for decades been in a close political and electoral alliance with the South African Communist Party (SACP) (Mr Mandela pictured with SACP leader Joe Slovo) which also has a strong ideological committment to abortion.

The 1996 Constitution signed by Mr Mandela made South Africa the first country to forbid so-called discrimination on the grounds of “sexual orientation”. Homosexualist activists have honoured Mr Mandela for this provision.

Mr Mandela is well-known for his activism regarding HIV/AIDS, through which he has many times promoted the use of condoms.

Nelson Mandela and “The Elders”
Mr Mandela is one of “The Elders”, a group of retired international public figures dominated by leading international advocates of abortion, homosexuality and population control.


The Temple of Dreams

An appeal has been lodged to save the former Catholic seminary at Cardross in Scotland. The attention is to raise £10million to ‘stabilise the structure and gradually restore some interior spaces for cultural and educational use’.

The ruinous, former, Catholic seminary at Cardross, its condition so cleverly described a few years ago by Jim Gilchrist  in “Temple to ruined dreams”  should perhaps remain exactly as it is –  as a monument to the havoc wreaked upon the Catholic Church following the Second Vatican Council. 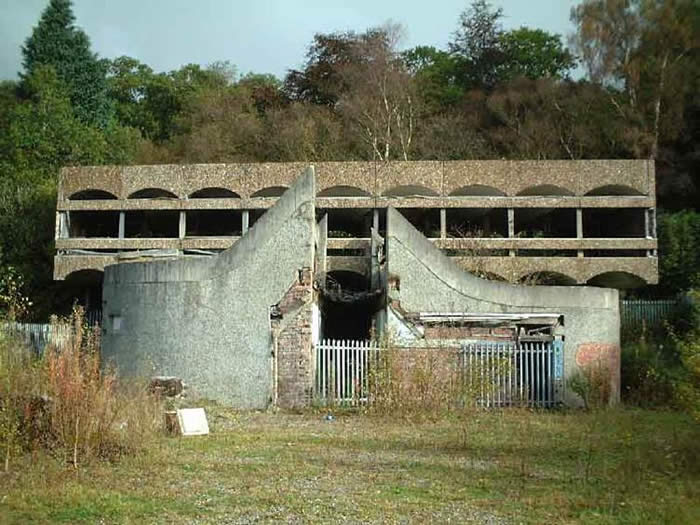 Just as the seminary was “one of the most significant 20th Century Scottish architectural icons of modernism”, the post-conciliar Church too is the most significant icon of modernism – of the type condemned repeatedly by pre-conciliar Popes.  The traditional ancient liturgy  shares the fate of the old mansion at Kilmahew in having been razed for all intents and purposes: the Church too has had its “alter boys” – the architects and apparatchiks of what one distinguished French theologian described as “the permanent liturgical revolution”, not to mention the architects of Neo-Modernism who have rendered the pre-conciliar Church unrecognisable.

The observation by a grumbling Cardross shopkeeper that, “the vandals have made a mess of it. It’s a real eyesore …not that anyone can really see it now” is a sentiment expressed by many older Catholics about the state of the Church into which they were baptised. Others have simply left.

Even the mundane observation by the architect that the Church authorities “didnae clean the gutters and if you don’t clean the gutters in the middle of a wood, you get water ingress” can easily be transformed into a reflection that the failure of the Church authorities to clean the Church of heresy and modernism led to the ingress of that “smoke of Satan” which Paul VI detected as having entered “the temple of God” in the aftermath of Vatican II.  In that sense the ruinous seminary would indeed be a fitting temple to ruined dreams.

James MacMillan, the famous, Scottish, Catholic composer, has undoubtedly a degree of clout in the musical arena. It was he who composed the liturgical music for Pope Benedict’s visit to Scotland and for the beatification of Cardinal Newman. While I do not consider myself in any way a musical connoisseur, I do not particularly take to all of Mr MacMillan’s classical pieces. I have his composition, The Last Seven Words on the Cross,  but find it in places too modern for my taste, although I do favour the piece, ‘Verily, I say unto you…’  which in its diverse strains  transports one from the Cross and the dust of the Holy Land to the very portal of Heaven. Perhaps I may come to appreciate more his other works.

But whatever I might think about Mr MacMillan’s music, I find myself, as do many others, in sympathy with his complaint that since Vatican II, ‘decades of experiment [have] spewed forth music of mind-numbingly depressing banality. He adds, ‘A lot of the favoured new settings are musically illiterate, almost as if they were written by semi-trained teenagers, getting to grips with musical rudiments. The style is stodgy and sentimental, tonally and rhythmically stilted, melodically inane and adored by Catholic clergy ‘of a certain age’.  I suspect he could have added cringe worthy in their delivery too, but he decided perhaps he had used enough adjectives. He gives vent to these feelings in his Telegraph Blog and includes examples there of the type of music he has in mind.

While we do not wholly agree with all that he says we do share his desire for a return to Gregorian chant, and for the return of the liturgy that gave birth to it.

‘What could have happened to this well-meaning young man [Guy Crouchbank]? And, after his besetting sloth at the outset and his later disillusionments and discoveries, what was to be the destiny of his enlargening sense of honor in the end? What glimpses may we come to have of his Higher Chivalry, so well rooted in his gradually deepened Catholic Faith, and in the magnanimous and humble example and memory of his beloved father?

By means of his three-fold sequence of novels concerning World War II, unmistakably based on his own distinguished and valorous and disillusioning experience from 1939-1945, Evelyn Waugh also proposes to show us the way of sacrifice: the way of honor and the higher chivalry.

His Military Trilogy, finally edited and published in one volume only in 1965, and entitled Sword of Honour is, at root, a study of chivalry and honour “in the Modern Age” – and also a revelation of unchivalrous dishonor – especially during a time of “Total War” and “People’s War.”17 (Evelyn Waugh was to die less than a year later, in his sixty-third year of life, in his home, after Father Philip Caraman, S.J., privately celebrated the Traditional Mass on 10 April 1966 – Easter Sunday.’